Entry into the LibGDX  Halloween game jam for 2019

*11/11/2019 - Did some code cleanup and finished adding in some features I originally intended the game to have for the sake of coding practice.

Game now contains 3 different weapons. you can cycle back and fourth to select your weapon with the Q or E keys. You also have the option of using the mouse wheel. Though in the browser it might have some issues.

You start with a pistol with infinite ammo. Enemies will on occasion drop a weapon. Pick it up to enable the weapon. It will auto equip on pickup. And subsequent pickups just refill the ammo to the max.

* Note, rockets do have a small explosion radius, so you can use them when enemies bunch up.

*10/28/19 -Small update to disable the context menu from popping up in the browser when right clicking* Thanks to Peanut Panda for pointing this out to me!

This is a very basic top down shooter which takes place in a graveyard.

You deal with 5 waves of enemies. Each wave only spawns enemies for about 30 seconds. The next wave wont start until all enemies have been killed.

Basic WASD movement, with mouse aiming and click to shoot.

You can use the right mouse button to throw a glow stick to light up a small area of the map. You only get 3 to these to use.

I consider the game unfinished, since I ran out of time to do what I originally intended. But I'm glad I got it to a point where I could at least submit it.

As my second Libgdx GameJam Entry this was a great learning opportunity.

I'll be honest. Things started off great, but I bit off waaaay more  than I could chew. I realized what I originally intended had to be cut short. But I didn't want to give up on making an entry so I did my best to rush this out.

Looking back this was a great excuse to work on some stuff I have never tried before. TiledMap, Mouse aiming, with weapon rotation and Lighting effects.

*Personal note for next time... SIMPLIFY!*

Most Assets where NOT created by me. Though I did have to make some modifications to them. Credit Below:

All sounds were found on freesound.org

This is a really good game! With great graphics and lighting.

I was enjoying this game on html but the right-click still brings up the menu, which sadly makes it not playable on web :(

Thanks! You are totally correct about the right clicking. I threw the html version up as a nice to have at the last minute but It completely slipped my mind! I'll try to fix it  when I have some time. 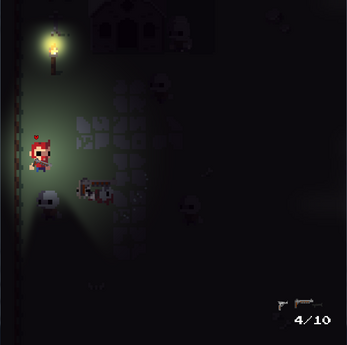 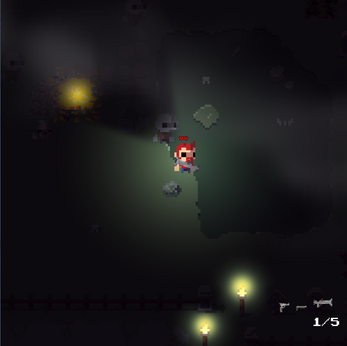